Friday night we were at the amazing venue of WEST brewery for a Disco Ceilidh. It was great to see loads of folk turn out in their tartan to shoogle their bahookies.

There was a great atmosphere and extra folk kept piling onto the dance floor even as each dance was on the go. This made for a happy bedlam with sets of dancers growing as the song progressed which made for an interesting Flying Scotsman which started with the usual four carriages and ended with nine.

There seemed to be an awful lot of WEST’s famous 2-pint beer glasses around which presumably was why, towards the end of the night, there was some rather groovy ad-libbing on the dance floor as disco-ceilidh went freestyle.

The audience was great and weren’t the type to want a sit-down between dances so at the end of the night we did a back-to-back medley of Strip the Willow to ‘Born Slippy’, Circassian Circle to ‘Get Lucky’, Military Two-Step to ‘Born this Way’ and then, in a departure from my planned set, a rather experimental Gay Gordons to YMCA.

I’d had a hunch that the Village People and the Gay Gordons would be a good mix, though I hadn’t tried it before, and with such a fantastic group of dancers and the heroic quantities of WEST’s beer that was being consumed, I felt it was the right time to try.

It worked a treat with dancers breaking out at intervals for the actions. It was brilliant fun, hugely cheesy and my only regret is that the various phones and cameras had all run out of battery/memory so I couldn’t record it on video for posterity.

Watch out for it at the next Disco ceilidh.

A few comments from the feedback forms:

‘Do it more, for longer and more often!’

‘Come and do Disco Ceilidh at our wedding!’

What did you like best?
‘It’s a DISCO CEILIDH!!’

Was there anything you didn’t enjoy?
‘When there was a break/the end’

Family Ceilidh in Hyndland Community HallFebruary 21, 2015
yippee it's the Disco Ceilidh at Hyndland!
My Tweets 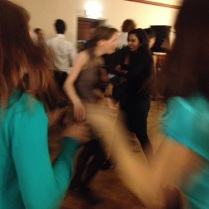 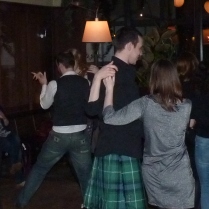 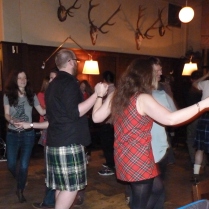 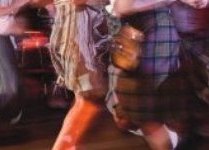 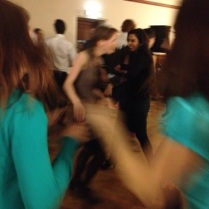